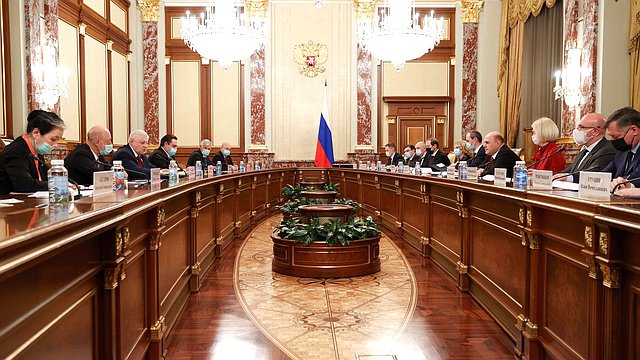 The Prime Minister of the Russian Federation Mikhail Mishustin thanked the deputies for the effective cooperation in discussing the initiatives developed by the Operational Headquarters to support the economy.

“The government has an operational headquarters to support the economy in the face of sanctions. We work almost 24 hours a day, as was the case during the fight against coronavirus infection. At that time, the Duma worked smoothly and effectively with the government, just as it does now, which is especially important when considering the laws needed to implement the initiatives included in the government’s priority action plan, “said Mihail Mišustin. He noted that a third package of anti-sanctions is being prepared.


The State Duma deputy was elected as part of the federal candidate list proposed by the Socialist Political Party “RIGHTEOUS RUSSIA – PATRIOTS – FOR THE TRUTH”
thanked Mihail Mišustin for the frank conversation.

“We do not agree on everything, but I must say that in this difficult time, the government, key ministries are mobilized and quickly make the decisions that the state needs,” Sergei Mironov summed up the event.

He pointed out that the issue of the need for concessional lending to the backbone industries was highlighted at the meeting, and the Prime Minister said that such a decision had been made.

They also discussed cultural issues, in particular the protection of Russian cultural figures from attacks from Western countries. In addition, Sergei Mironov advocated the need to form a cultural and ideological bloc in the government.

They also discussed the field of education. “Now that sanctions have been announced, the whole Western world is saying that we are going wrong, it is time to forget the Bologna system,” Sergei Mironov said. He advocated the abolition of the exam.

In addition, the problems of science were highlighted, including the low salaries of scientists and engineers, the need for real social protection of Russian citizens: for example, state regulation of basic food prices, payments to the poor to buy. domestic products, raising wages and unemployment benefits, etc.