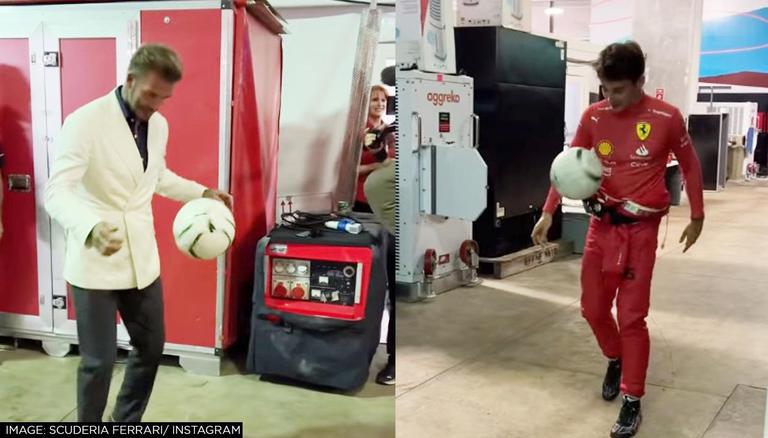 Sunday’s Miami GP with the stars ended in victory for F1 world champion Max Verstappen in the opening races. The current Ferrari leader Charles Leclerc started the pole position race, but lost the lead to Verstappen and finished in second place, followed by his teammate Carlos Sainz.

The event witnessed big names from the sports world as they reached the circuit and were pictured with F1 stars. David Beckham met basketball legend Michael Jordan, NFL icon Tom Brady, and spoke with Mercedes driver Lewis Hamilton. Ferrari posted a video on the social network where Charles Leclerc played football with David Beckham before the start of the race.

Charles Leclerc started the race from pole position and before the start of the Miami GP, the Ferrari driver played football with the former star of Manchester United and Real Madrid David Beckham in the Ferrari garage. The pair exchanged passes, with the bench serving as a net. After the meeting that Beckham won, the couple enjoyed a friendly exchange.

The best of the Miami GP

Sunday’s victory at the Miami GP for the Red Bulls Max Verstappen was his second victory in a row in the United States after the victory in Austin in 2021. Charles Leclerc finished second, his first podium finish in the US and 17th podium in his career. . Leclerc teammate Carlos Sainz finished third, giving Ferrari two podiums. Both Ferraris have reached the podium for the third time this year in five races. This never happened in 2020 or 2021.

Lewis Hamilton finished the Miami Grand Prix in 6th place, putting the Mercedes driver out of the top four in the US for the first time in his F1 career. The championship continues in Catalonia The Spanish Grand Prix on May 20-22, Red Bull is now only six points behind Ferrari – and Verstappen 19 points behind Leclerc. Lewis Hamilton has problems this season. His best position so far this year was third place in the opening GP of Bahrain, when he scored 15 points. His last trip in Imola GP ended with zero points after 13th place.