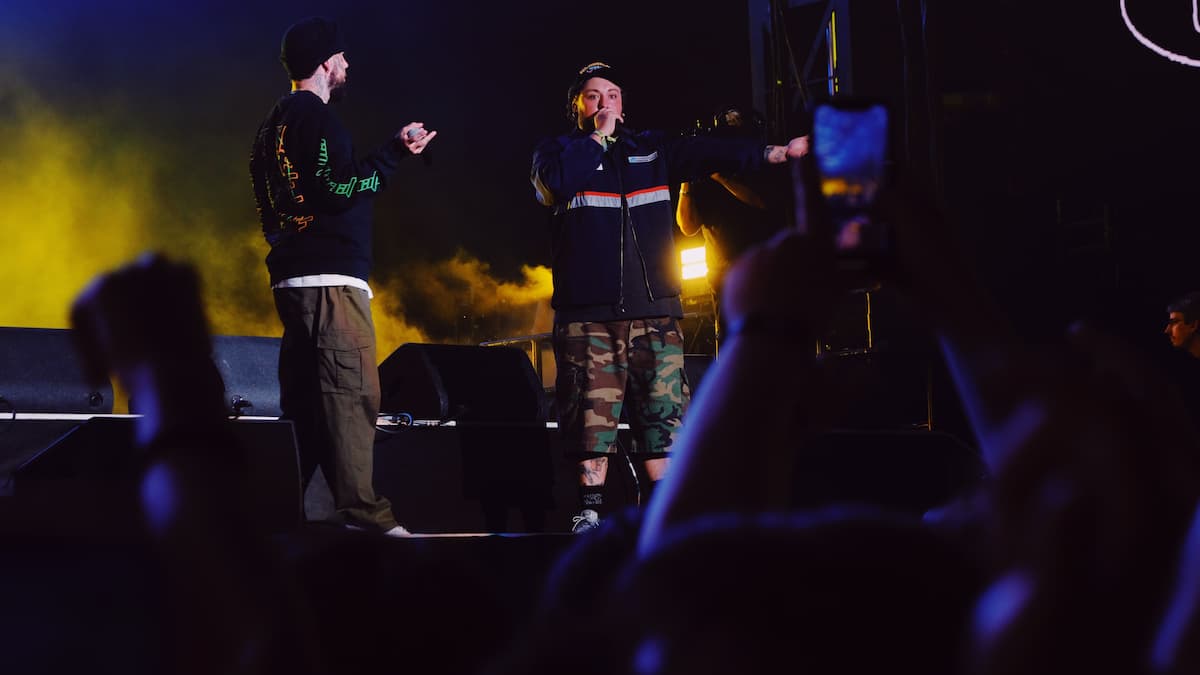 Good old Ludacris had set the table with a non-stop performance. $uicideboy$ took over in front of a fired-up crowd during a night the duo will likely remember for a long time.

“I’m serious. We’ve played a lot of shows, but you’re an incredible crowd. I’m serious. You make sure we have a good time,” began Rubia da Cherie, who was interrupted by a series of Ohé, Ohé Ohé chants from the audience.

The duo from New Orleans, making their first appearance at the Old Capital, delivered a nearly flawless performance at the Plains, going all over the place in their repertoire, graced by big bass sounds.

Accompanied by a DJ in front of a huge human skull, the formation emphasized its more rhythmic repertoire, giving the beginning of the performance If self-destruction was an Olympic event, I’d be Tony Hardingwith giant screen images of a skater in tears during the Lillehammer Olympics.

Before Avalon, Ruby da Cherry asked the crowd to stick out their middle fingers and give the middle finger to the haters, the government and all religions. There was a kind of consensus.

At a time Antarcticathe lights are closed, at the request of the group who wanted to see them from their phones.

The independent formation managed to maintain public interest throughout its existence. Ruby da Cherry and $crim are dynamic and complement each other perfectly on the boards. Words and sometimes swear words pass by at a dizzying speed.

“It was an honor to play for you,” they said before reconnecting with the sounds And to those I love, Thanks for sticking around that we would have liked to hear the resonance even longer.

Right before that, Ludacris showcased all of his experience. Fired up, in great shape and generous, he put in a great performance.

Without downtime, he played twenty songs in an hour. Several of the big bombs that exploded on the charts were in the program with Southern hospitalityfrom his first album, get uplong version money maker, Yes, Gorgeous, break your heart and how low. He was generous with the “hits”.

Ludacris was constantly in touch with the public. He didn’t let them go throughout his performance.

“We came all the way from Atlanta to see you. Make more noise than that,” started DJ Infamous before the rapper and comedian arrived.

After Money Maker, he described Quebec as the noisiest city in which he performs.

The two of them had fun getting the public to scream left and right during the competition, where the amateurs insulted each other with swear words.

“We were supposed to perform eight songs. We will do more. I adore you,” he dropped, accompanied by another rapper on the boards who brought a lot of dynamism.

DJ Infamous, who was celebrating his birthday, had his moment with a segment where we heard, among other things Jump aroundwhere it bounced all over the place, and bits of DMX’s Party Up (Up in Here), Smells like Teen Spirit of Nirvana and We will Rock You queens. Strangely, we didn’t sing happy birthday to whoever was supposed to be performing at the end of the night at Dagobert.

All I do is wincovered by DJ Khaled and move bitchwith, again, some profanity putting an end to a successful and popular performance.

Were the Plains people?

Maybe not as many as when Luke Combs and Maroon 5 passed, but there were many, many. A particularly celebratory crowd that didn’t skimp on “Ahoy Ohé Ohé”. The atmosphere was.

After competing for the best seats as the doors opened to Bring de Noise from Anthrax and Public Enemy, the evening had started with bad news, however.

Night Lovell’s performance scheduled for 7:00 PM has been cancelled. The Ontario artist was forced to cancel his visit due to transportation issues. Is it because of the current problems and the many flight cancellations at the airports?

FEQ did not have details on the exact reason for this cancellation.

We decided to beat Denzel Curry to 7:30 p.m., but the Florida rapper stuck to his schedule and hit the stage as scheduled at 7:40 p.m.

Wearing a hair cap, the self-proclaimed best rapper alive did everything a hip-hop show should do for XXL magazine last May.

Accompanied by DJ POSHtronaut, he asked the audience if they wanted to have a good time and raised his hands and waved them in the air. Ricky, Ultimate where he pumped up the crowd while “rapping” at full speed, Sumo Zumo with a shocking crowd, X-Wing and Clout Cobain – Cobain Co13AiN were the highlights of his performance.

“When we come back, I want to see everyone here at my show,” he asked before ending his performance.