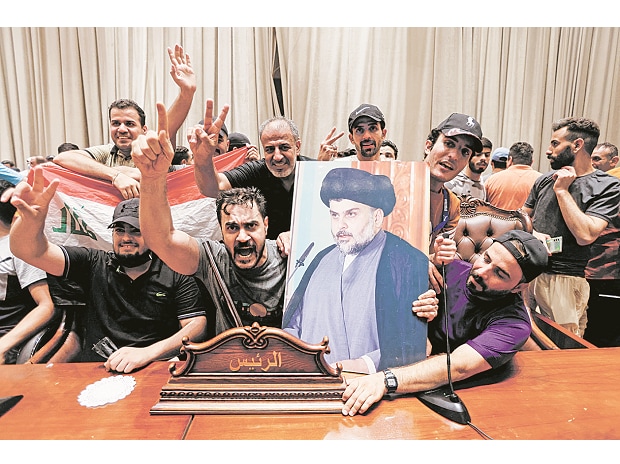 Iraq’s prominent Shiite cleric, Moktada al-Sadr, called for the dissolution of parliament and early elections, urging his followers to continue an open sit-in in the parliament building until their demands are met.

“The majority of Iraqis are tired of the ruling class, including some of the faces of the sadistic movement,” al-Sadr said in a televised speech.

“The revolution (comprehensive reform protests) was started by the Sadrists, and it will not exclude the corrupt from the Sadrist movement,” al-Sadr was quoted as saying by Xinhua news agency.

“I am not asking for power, but I am seeking reform,” the Shiite cleric concluded.

On Saturday, thousands of al-Sadr’s supporters began a sit-in in parliament to reject the appointment of Mohammed Shia’ al-Sudani as prime minister on July 25 by al-Sadr’s opponents in the Coordination Framework (CF), an umbrella group of Shiite parliamentary parties.

The CF became the largest alliance in the Iraqi parliament after al-Sadr ordered his followers in the Sadrist movement, the biggest winner of the October 10, 2021 election, which secured 73 seats, to withdraw from parliament.

In recent months, continued infighting between Shiite parties has hampered the formation of a new Iraqi government, preventing it from electing a new president with a two-thirds majority in the 329-member parliament under the constitution.

If elected, the president will appoint a prime minister nominated by the largest alliance in parliament, now the CF, to form a new government to rule the country for the next four years.

(Only the title and image of this report may have been edited by Business Standard staff; the rest of the content is automatically generated from the aggregated source.)

Business Standard has always strived to provide up-to-date information and commentary on events of interest to you that have wider political and economic implications for the country and the world. Your encouragement and constant feedback on how to improve our offering has only strengthened our determination and commitment to these ideals. Even in these difficult times arising from Covid-19, we remain committed to informing and updating you with credible news, authentic views and incisive commentary on the important issues of the day.
But we have a request.

As we struggle with the economic fallout of the pandemic, we need your support even more so we can continue to bring you more quality content. Our subscription model has seen an encouraging response from many of you who have subscribed to our online content. More subscriptions to our online content can only help us achieve our goals of bringing you even better and more relevant content. We believe in free, fair and credible journalism. Your support with multiple subscriptions can help us deliver the journalism we are committed to.