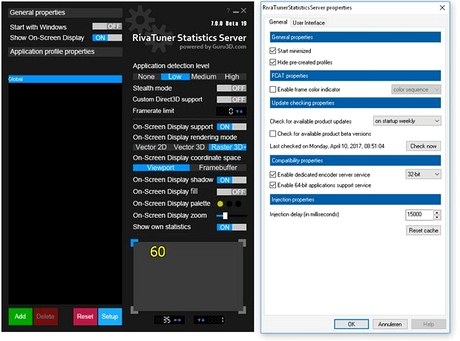 Alexei Nikolaychuk, also known as Unwinder, has announced a new version of the popular Riva Tuner Statistic Server for the first time this year, which is an integral part of the powerful MSI Afterburner diagnostic tool.

The new version 7.3.4 beta 1 build 26583 of the RTSS utility program has received a huge list of changes that affect both ordinary users who use the program for monitoring and professionals who write their own modules and communicate at a lower level.

Here are the key changes:

Fixed an issue that caused the “Run with Windows” setting to be reset when you reopened program properties and closed the program.

Fixed an issue where the font overlay was invisible in some older 16-bit full-screen programs (such as Quake 3: Arena in 16-bit display mode in Windows 10)

You can download RTSS 7.3.4 beta 1 from our website when it is officially released in a few days.