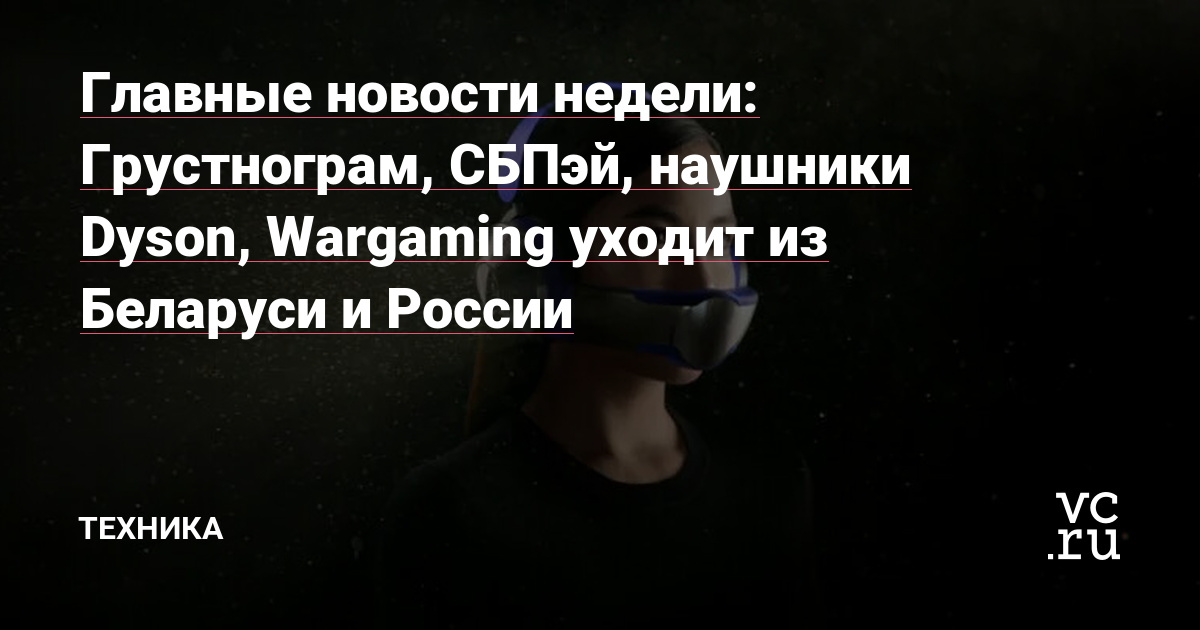 Based on publications Izvestia Ir RBCThe Ministry of Digital Development, Telecommunications and Media of the Russian Federation has sent a letter to mobile operators with recommendations to “eliminate unlimited traffic consumption” and introduce restrictions on unlimited tariffs.

According to the letter, this is necessary to ensure the 16 March. the implementation of the Presidential Decree on measures to ensure socio-economic stability and the protection of the population in Russia, taking into account the “proper functioning of communications networks in Russia as well as the seamless and sustainable operation of Russia’s communications infrastructure”, ensuring equal network load.

Dyson has made the Dyson Zone headset with air purifier

Dyson, who known for their vacuum cleaners, but announced a new product last week – headphones. They plug into an air purifier that looks like a cyborg mask! Let’s explain. Dyson has introduced the Dyson Zone, which is actually a pair of headphones attached to a small air purifier that covers the nose and mouth. This is Dyson’s first step into the world of sound.

Dyson Zone aims to combat noise and air pollution and is now debuting 500 prototypes. In terms of sound, the headphones have three active noise reduction modes: isolation, maximum noise reduction; a conversation that is activated when the panel is lowered to turn off the cleaning function and increase the volume of the speech; and transparency, which omits the most noise and helps to understand the environment.

The Dyson mask does not protect against coronavirus.

Social network for the sad. Grustnogram appeared in Russia

Grustnogram is currently running as a web-based version, but developers plan to launch the Android app publicly on Google Play by the end of the week, and a little later on the iOS app in the App Store. Sadnogram automatically renders all photos in black and white. The project website explains, “Show the sad self, show the sad others, grieve together.”

The size of the device is similar to a normal ten-ruble coin. It has a resolution of 1280×1024 pixels and a pitch of 12 microns. Such a screen can be used in virtual, augmented and mixed reality glasses, photo and video cameras, thermal imaging sights and even thermal imaging.

E3 2022 canceled due to coronavirus

The news came shortly after Razer Product Manager Will Powers issued a letter from the event organizer: “I just received an email. email … This is an official, E3 digital show canceled in 2022. Controversial feelings about it… “Next year, the organizers plan to hold E3 in some new format, but what exactly is not yet known.

Russian banks are preparing to issue SBPey, a local analogue of Apple Pay and Google Pay

The readiness to start the service from 1 April has already been confirmed by the Post Bank. Rosbank, MTS Bank, Dom.RF, Promsvyazbank and others will also join the service in the near future. Some banks, such as Russian Standard and Expobank, have already introduced SBPey.

Now the main payment method through SBPey is a QR code. However, it is planned to install a payment function via NFC in the near future so that you can simply put your gadget in the terminal.