The lighting for the future is digital with Audi 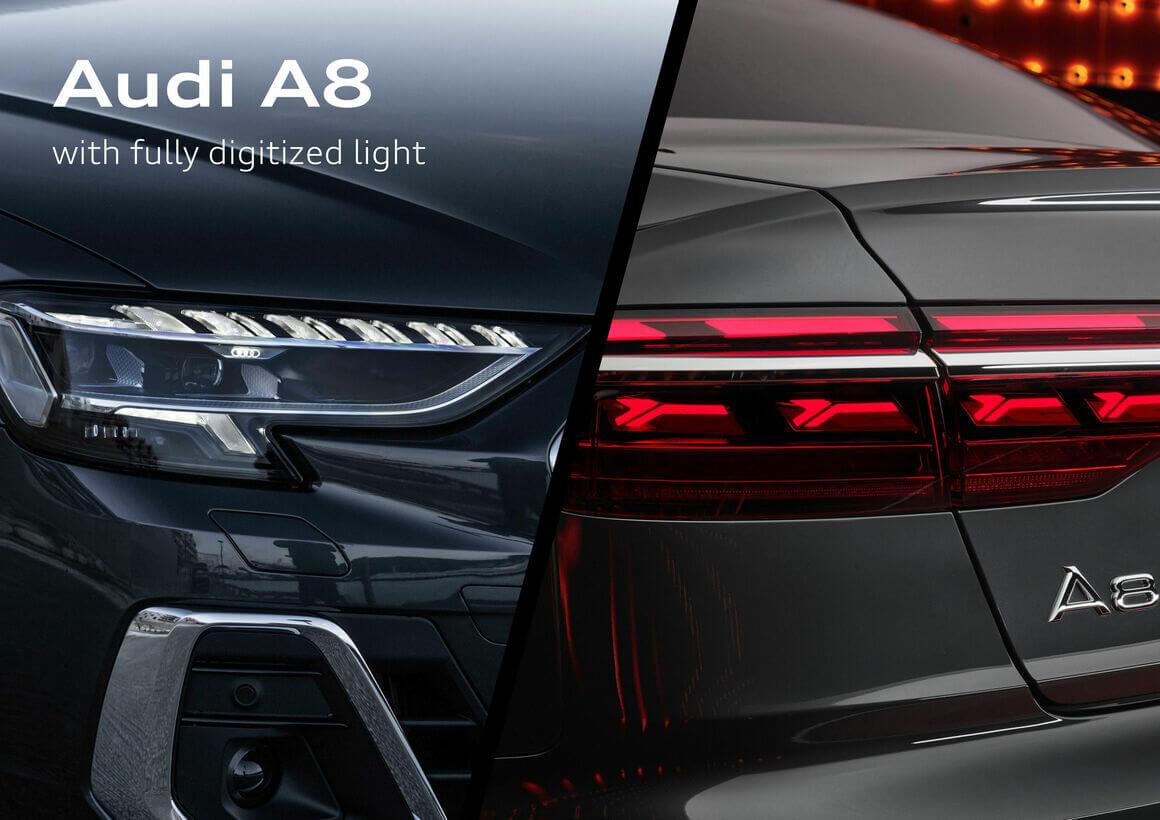 Digital OLED taillights have a proximity indicator that draws the attention of other road users. As the car approaches a stationary Audi, the parking sensors detect movement and activate all the remaining OLED segments to create a brighter and larger light surface that is as visible as possible. When the Audi leaves the parking space, the digital OLED tail lights switch back to the selected signature. This additional safety feature also applies to cyclists and motorcyclists, who can also be detected by sensors.

One leg in the future
Playful entertainment and “play” under lighting
The Audi A6 e-tron concept car offers a lighting-based “playful” look. But what exactly is it? Modern Digital Matrix LED headlights project video games on the ground or on the wall in front of the car, allowing customers to play while the vehicle is charging. Games controlled via a mobile device can be used in conjunction with car headlights, which turn into smartphone video game projectors. The manufacturer is constantly thinking of new offerings to offer to its customers, and especially plans to integrate content from movie and game providers in the future.

In addition to the development of digital matrix LED headlights, the manufacturer is opting for digital OLED technology for the future, which should become much more than a conventional light source. Its development focuses primarily on outdoor screens, which increase security and promote personalization, as well as improving communication with the outside world. However, flexible digital OLED taillights still have an advantage. They have a flexible substrate that allows you to change the two-dimensional structure to a three-dimensional structure. This feature not only accentuates the shape of the lights, but also allows you to customize the digital lighting design on the outside and the display symbols to better communicate with the outside world.

Common situation: A pedestrian in the city wants to cross the street between two parked cars, but the truck does not allow him to see the road. The digital OLED taillights illuminate not only the rear but also the side: if the engine is switched on, they also signal any approaching vehicle, for example before a person gets out of the car.

These safety-related features and personalization options have been and are the result of close collaboration between technology and lighting design, as explained by Stephan Berlitz, Audi’s Head of Lighting Development:
“The technology teams work together with the design teams in the pre-development phase and with the licensing authorities in the preliminary stages. Audi’s lighting is first and foremost a matter of safety: it’s visible and visible. And digitalisation offers even more opportunities to make cars safer. »

Cesar Muntada, responsible for lighting design, adds: “Lighting technology and lighting design are integral to Audi. Lighting is a visible expression of the Vorsprung durch Technik concept. We give our cars a unique face and refine the character of the model and brand. Audi must be recognizable in the dark at first sight, near and far. We therefore adhere to the principle that guarantees the recognition of the car and allows it to express its character. »

How can you be sure that Audi will be recognized? In line with this principle: all Audi light signs emphasize the width of the car with its exclusive light segments and exterior elements. The combination of these segments forms one whole. When needed, lighting designers implement all the features and light signatures, designing them to look good on a digital image projected on a car or on the ground. “By reiterating this principle,” says Muntada, Head of Lighting Design, we ensure that every Audi is recognizable. »