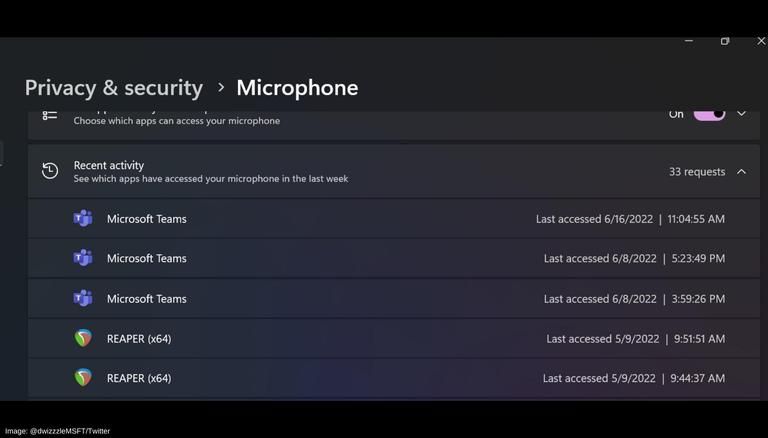 Windows 11 is improving as developers add new features with the right updates. The latest beta version of Windows 11 will allow users to monitor applications that use system resources, such as the camera, microphone, and device location. This feature is called Privacy Audit and will be available to users in Privacy and Security Options. Read on to learn more about the new feature in Windows 11.

As David Weston, vice president of security and enterprise for Microsoft OS, said, the new privacy audit feature in Windows 11 allows users to see the history of sensitive device information, such as the microphone, camera, and location. The image shared by Weston shows how this feature looks in action. The name of the program that used the most important system resources and other important information, such as the date and time, are displayed on the left.

To give users an overview, this feature also shows the total number of queries submitted by users. This allows users to constantly check multiple programs on their system to see if the program is not accessing resources without being prompted. This feature is already available on Google’s mobile operating system, where it’s called the Privacy Dashboard. It shows all the mobile apps that have recently reached your smartphone’s camera, microphone, or location.

Microsoft recently launched Defender for individual Microsoft 365 subscribers, allowing users from all platforms, including Windows, iOS, Android, and MacOS, to use the service to protect their devices. This can help users manage their security measures and review the protection of all family members. Users can view existing antivirus protection (such as Norton or McAfee). Defender recognizes these protections in the dashboard.