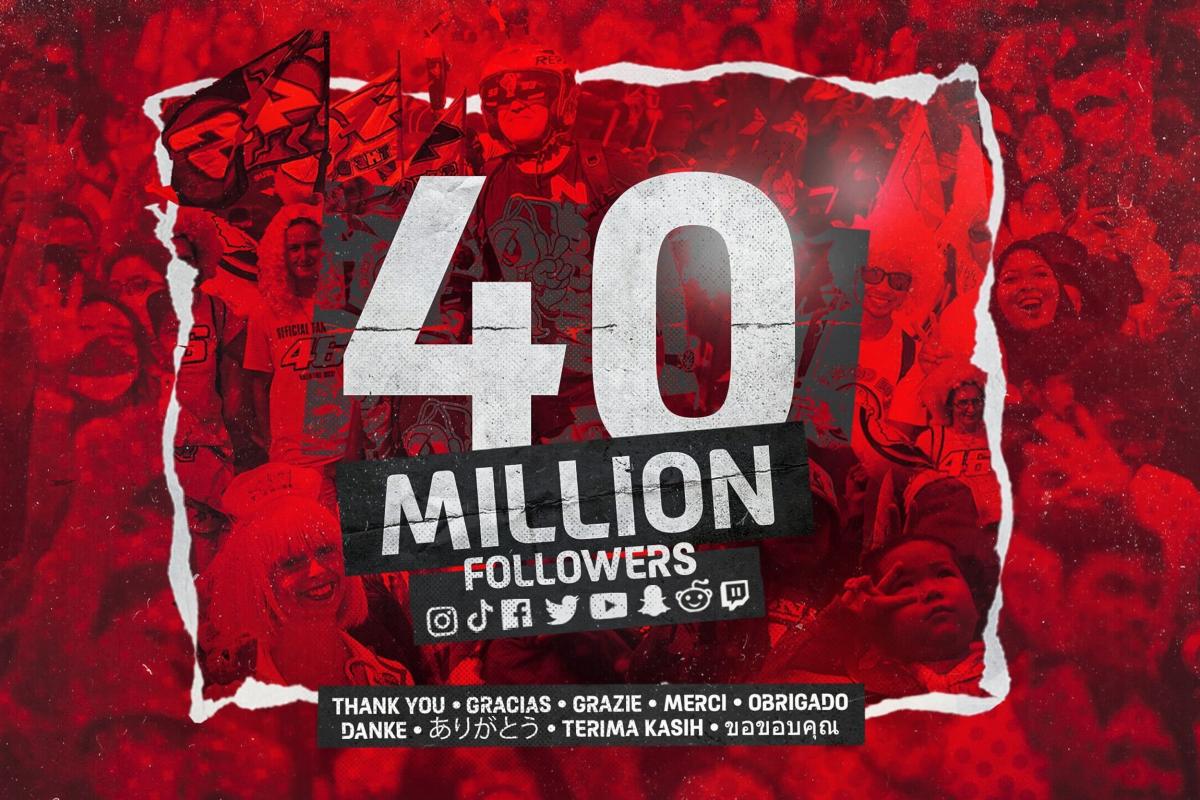 There have never been so many fans of the fastest motorcycling world championship on the planet!

The FIM MotoGP ™ World Championship in 2022 has reached a new milestone: 40 million fans on social networks and digital platforms! Just a season after celebrating 30 million, MotoGP ™ has seen an incredible 33% increase in the number of fans and followers on various platforms, where we continue to provide the best possible content to the public.

The MotoGP ™ digital adventure began in 1999 with the introduction of the VideoPass, and since then the world’s fastest motorcycle racing championship has continued to evolve and innovate. MotoGP ™ appeared on Youtube in 2005, before Twitter and Facebook spread, and will reach an incredible 40 million fans on all platforms in 2022 (like never before), all offering a wide range of customized, exclusive and quality content.

From Facebook, Instagram, Twitter, YouTube and Snapchat to Twitch and TikTok and others, we continue to push boundaries and increase our audience worldwide. Our original content, such as the new Challenges series, which highlights the human side of the discipline, is constantly evolving. In addition, more and more events and programs are available live on our platforms for fans to enjoy 24/7.

More than 17.5 million people use Facebook to follow MotoGP news, as well as a number of exclusive, personalized and highly accessible apps. With Facebook Watch, our fans also have access to original and exclusive MotoGP content worldwide with three to seven minutes of video so you don’t miss the latest news from our sport. The recent addition of Facebook rolls to the social network has also brought in shorter video content, highlighting some of the memorable moments that take place on and off the track.

Bands like MotoGP ™ Tech Updates are for fans who want to learn more about the sport. Anyone is free to join in and enjoy regular updates on the technology and innovation we see.

Our YouTube channel has grown very strongly and has just reached a new milestone: five million subscribers. Our original series, highlights, interviews and more make the platform one of the most popular among fans who want to be more and more involved with their sport. The recent introduction of YouTube short films has also sparked interest and helped reach a growing audience. These 15-second videos allow you to see a viral moment or a spectacular action that took place on the track.

One of the oldest social networks is still one of the most important MotoGP kas, which currently marks the departure of three million followers. On Twitter, our fans can see the latest news, polls, videos, news about the events of each race weekend, and articles discussing some controversial issues. L’oiseau bleu is an incomparable platform for interactive discussions and allows fans to chat with each other or with the MotoGP entity.

Instagram’s 10 million followers grew rapidly to 13 million in 2020. With the best digital content a sport has to offer, Instagram followers enjoy a stunning photo, music video, a range of edits, a wide range of story content, and lots of live coverage of a variety of drivers and figures from the paddock.

For 50 million and more

MotoGP arī is also available on some of the fastest growing platforms in the world, where the motorcycle community continues to grow. Fans can go behind the scenes of Snapchat, enjoy viral moments at TikTok with nearly 1.5 million other followers, or join hundreds of thousands of other fans on Reddit to discuss our sport in more detail.

The Twitch channel is also gaining momentum with exclusive live events that give fans a unique opportunity to interact and be part of MotoGP ™. The Last On The Brakes Podcast is now streamed live on Twitch and only. The shows can then be found in the audio version of Spotify, Apple Podcasts, Google Podcasts, and more. Fans have never had so many ways to enjoy quality MotoGP content.

As the 2022 season begins, MotoGP ™ continues to offer the best that our sport has to offer. Take part in this adventure! Next stop: 50 million!

Watch the race live or OnDemand and enjoy it with VideoPassall content on motogp.com, whether it be interviews, technical articles or historical events.